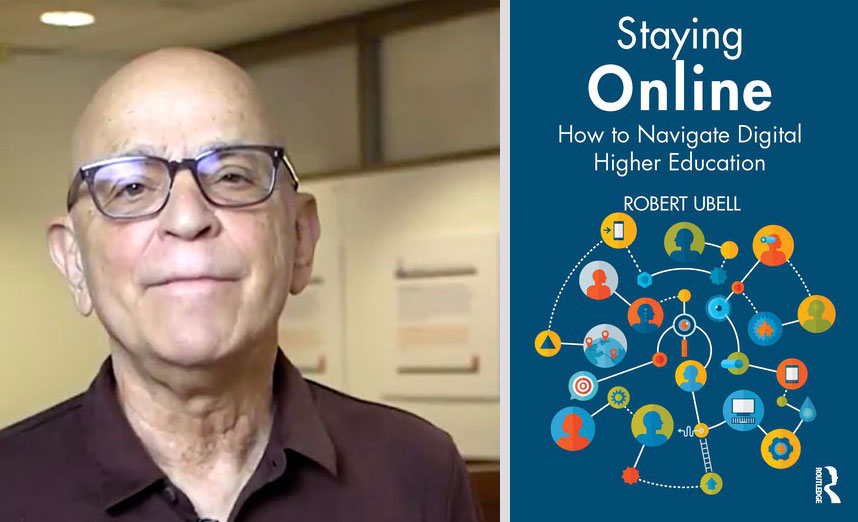 “When colleges turn to OPMs, rather than building their own digital capacity, they forfeit their future by neglecting to strengthen their virtual infrastructure,” analyzes online learning expert Robert Ubell in his latest book “Staying Online. How to Navigate Digital Higher Education,” published by Routledge and scheduled to be released this upcoming September 7.

“Staying Online” is one of the first books to analyze the dramatic changes in higher education since the pandemic started in March 2020. Across 180 pages, the book covers the rise of MOOCs, OPMs, and the massive digital immersion of higher education due to the COVID-19 outbreak.

In an interview at IBL News this week, Robert Ubell, Vice Dean Emeritus of Online Learning at NYU’s Tandon School of Engineering, columnist, and author of the essay Going Online: Perspectives on Digital Learning, pointed out “the vast differences in the digital academic economy today, with online and on-campus enrolling different sorts of students, with relatively different faculty, different infrastructure, and far more expensive recruitment strategies.”

“Despite strong opposition, digital education has triumphed,” he states.

IBL News: Would you summarize the main findings of your book?

Robert Ubell: Staying Online is among the first books to recognize the dramatically changed higher ed landscape since the pandemic altered secondary education in the US and around the world.

It covers the rise of MOOCs, OPMs, and the almost total immersion of every higher ed classroom in digital education at the height of the COVID-19 invasion.

IBL News: Where will online education be within one, five, ten years?

Robert Ubell: As residential enrollment continues its steep decline–owing to falling high-school graduation rates in the US especially–online has stepped in to fill missing on-campus students with virtual ones.

Today, about a third of college students are online, in 5 to 10 years, following the digitization of nearly every industry, it may represent nearly half, a totally unexpected climb from nowhere in just two decades.

IBL News: What are the most important disruptive initiatives?

OPMs, too, have witnessed a dramatic expansion. Last year, 300 new OPM partnerships were signed, and in the first quarter of this year, 109 new ones were launched.

IBL News: Would you share your view on the 2U-edX transaction? What does the deal mean for the industry and the learner?

Robert Ubell: Harvard and MIT saw an exit strategy when 2U came calling, with hard cash to take the money-losing pit–edX–away.

2U’s acquisition of edX doesn’t represent a change in the online economy, so much as a recognition of 2U’s financial power and Coursera’s continued to climb above all other MOOC providers.

It leaves two edtech giants at the top, exactly where they’ve been for years.

IBL News: What do you think about OPMs, and in particular, 2U?

Robert Ubell: OPMs succeed in often generating far more enrollments than colleges on their own, but the payback is serious, handing over half of each school’s online revenue secured by their OPM partners.

When colleges turn to OPMs, rather than building their own digital capacity, they forfeit their future by neglecting to strengthen their virtual infrastructure, a competency they will surely require as online becomes the name of the game, not just for one or two master’s degrees, but for hundreds of courses.

Robert Ubell: Because online degrees allow low-income students to continue working while earning their degrees, digital education stands out as a key path for them to join the new economy.

But they shouldn’t be misled by for-profits that do not provide the skills they need to succeed in the post-industrial economy.