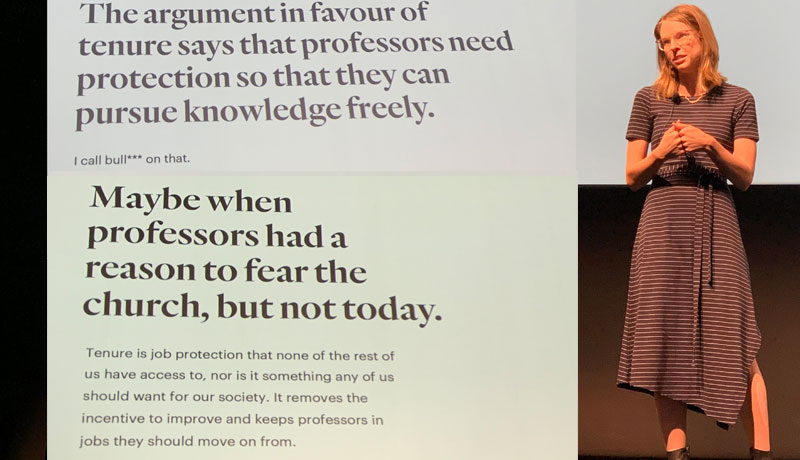 One hour after delivering the keynote address of the day, Heather Payne, speaker and entrepreneur, tweeted: “Just told a room full of tenured professors that tenure is dumb and should be abolished and lived to tell the tale. Thanks for having me, State University of New York!”.

Heather Payne’s post was a rightful summary of an energetic conference that shocked many professors gathered in the auditorium of SUNY’s Purchase College in New York, yesterday during the second day of the CIT2019 event.

This young Canadian educator, founder and CEO of the HackerYou coding bootcamp, and named one the top innovators in North America, delivered a one-hour talk featured as “Starting from scratch. How higher ed needs to change its contract with its students”.

The main thesis was that “college isn’t designed for students”. Collectively, 44 million Americans owe $1.5 trillion in student loans. Besides, as she highlighted, there is a mental health crisis, with many students experiencing episodes of overwhelming anxiety. The university system has its origins in Medieval Europe, where the instruction was based on delivering lectures, and main teaching subjects were arts, law, theology and medicine.

“Higher education needs to be fully redesigned,” claimed Heather Payne [in the picture], before explaining how new colleges should function.

In addition to eliminating stadiums, as a metaphor of sports programs, Mrs. Heather stated that tenure should be eliminated, along with the research job. “No tenure. And professors should do no research”.

“Tenure is job protection that none of the rest of us have access to, nor is it something any of us should want for our society. It removes the incentive to improve and keeps professors in jobs they should move on from”.

“We want professors to spend their energy coaching, mentoring and guiding the leaders of tomorrow. Research in higher ed has been nothing but a distraction at most schools, taking away from the student experience”.

She proposed no tuition payment upfront and an income sharing agreement with students when they land their first job after graduating from college. This model is being implemented in her 30-employees, Toronto-based start-up, which teaches 9-week long web coding-related programs, helping learners transition from low paying jobs to $50k+ ones.

Just told a room full of tenured professors that tenure is dumb and should be abolished and lived to tell the tale.

Thanks for having me, State University of New York! ❤️