Home Top News U.S. Secretary of Education Asked for a Disruption of the System Since...
Twitter
Facebook
Linkedin
WhatsApp
Email 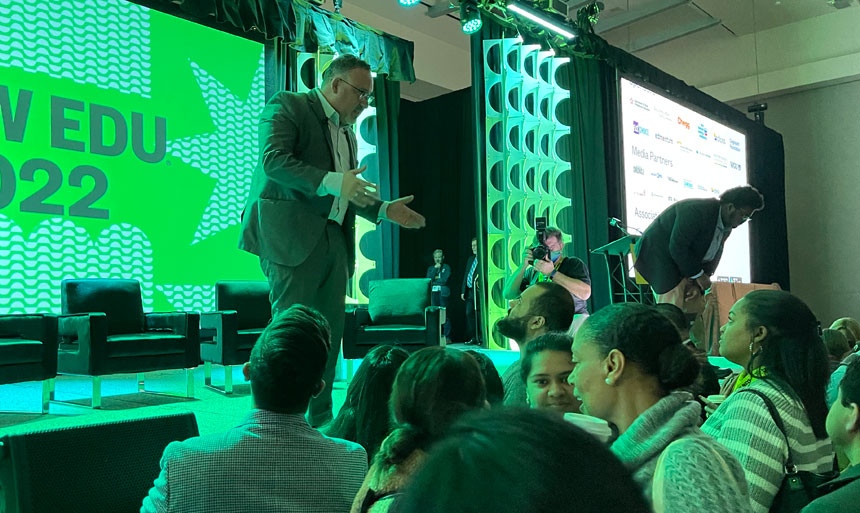 The U.S. Secretary of Education, Miguel Cardona, said yesterday in Austin, Texas, during a keynote talk at the SXSW EDU Conference that “the current educational system is broken because it is not designed for everyone.”

Mr. Cardona — who also visited the Austin Community College District’s Highland Campus on Wednesday and Blazier Elementary School — joined three students for a panel discussion on how to reimagine education.

The keynote featured an introductory message by A Starting Point cofounders and actors Chris Evans and Mark Kassen. The session, titled Reimagining Education with Students at the Center, was moderated by journalist Dana Brown, who focused the conversation on how education systems that meet the needs of today’s students can be created.

“Let’s disrupt the system together,” he addressed an audience of educators, teachers, leaders, and attendees interested in the subject. “We’ve normalized disparities, and now we need to proportionally disrupt the system; it didn’t work for everyone.”

“Educators need to be supported; we can start by not passing legislation that undermines educators,” he added.

Miguel Cardona — in the picture above — garnered applause from the audience in several moments. “This is our moment; we need to think outside the box.”

Regarding the ongoing cultural war due to the political divide, the U.S. Secretary of Education said, “nobody wants a bully, especially when it happens to the most vulnerable students.” “Our focus is how we can better serve students.”

The SXSW EDU Conference & Festival attracted this year (March 7-10, 2022) thousands of attendees and tens of speakers interested in innovation in the education industry.

I had the privilege of interviewing the US Secretary of Education @SecCardona today. Planting the seed that the White House needs to bring the Science Fair back!