Home Top News The U.S. Shows as the Number 1 in Education Across the World,...
Twitter
Facebook
Linkedin
WhatsApp
Email 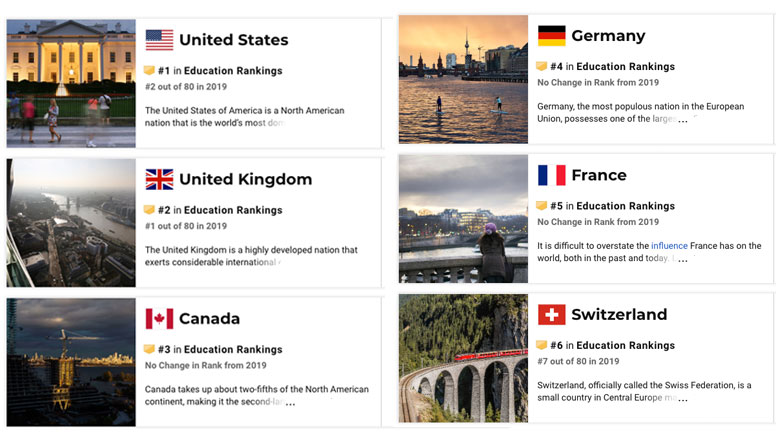 The United States stays on top, as number one, in the Education Ranking in The 2020 Best Countries Report, a ranking and analysis project by U.S. News & World Report, BAV Group, and the Wharton School of the University of Pennsylvania. This report evaluated the perceptions of 73 nations across a range of categories, from economic influence to education, to determine which countries wield the most influence.

The U.S. is followed by, in this order, the United Kingdom, Canada, Germany, France, Australia, Sweeden, the Netherlands, and Denmark.

To determine the ranking, the authors considered mostly if countries provide top-quality education, have a well-developed public education system, and whether or not people consider attending a university or higher-level educational degree program.

“The United States of America is a North American nation that is the world’s most dominant economic and military power. Likewise, its cultural imprint spans the world, led in large part by its popular culture expressed in music, movies and television,” says the report.

Despite its improvement in the ranking, from second to the first place, the authors question the country’s direction due to President Trump‘s policies. “Trump’s rhetoric and stances on issues including immigration and foreign trade have raised questions around the world, including from the country’s closest allies, about the nation’s future course on the global stage.”

Beyond education, The 2020 Best Countries Report highlights the following: