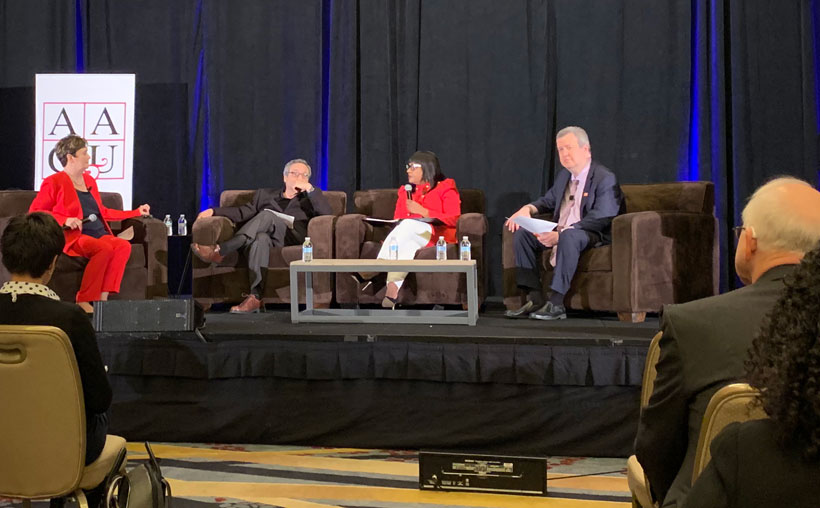 Over 2,200 educators and academic leaders attended this week the AAC&U annual meeting in Washington DC, networking and exploring ways to shape the future of higher education.

The conference hosted more than 200 talks, forums, and sessions, including an opening plenary on “The Enduring Value of Liberal Education”, exclusively featured at IBL News –watch below.

In addition, AAC&U, Washington DC-based Association of American Colleges and Universities (AAC&U), announced the winner of its Frederic W. Ness Book Award, Jim Crow Campus: Higher Education and the Struggle for a New Southern Social Order (Teachers College Press). The 2020 Ness Award was formally presented to the author, Joy Ann Williamson-Lott, Dean of the Graduate School, and Professor at the University of Washington College. The book illustrates the power of student and faculty activists in the black freedom struggle and the anti-Vietnam War movement to advance social justice.

In a room full of attendees, Mary Dana Hinton, President, College of Saint Benedict, said during the main plenary session, “the power to embrace liberal education and change institutions is within this room”. Lynn Pasquerella elaborated on the need of finding “a compelling narrative.”

Andrew Delbanco, President, The Teagle Foundation and Professor at Columbia University, provided perspectives regarding the direction that institutions should take. Among other ideas, he mentioned the success of the online degrees at Georgia Tech.

Scott Jaschik, Editor at Inside Higher Ed, agreed on the value of liberal education and mentioned the case of the exploitation of adjunct professors.