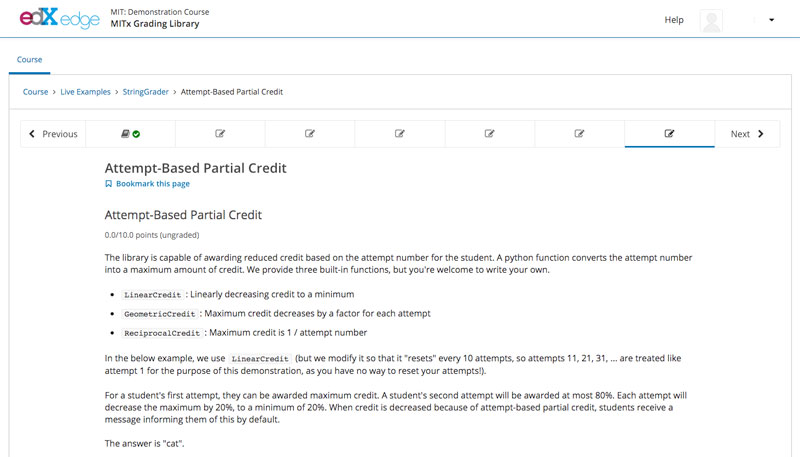 MITx has released a version 2.0 of the MITx Grading Library, an open-source python grading library that gives instructors expanded options for constructing much richer problems and exercises on the Open edX platform.

The full code, under a BSD-3 license, can be found on GitHub, while comprehensive documentation is here.

Created by Jolyon Bloomfield and Christopher Chudzicki, at MIT Digital Learning Lab, this tool is compatible with Python 2 and 3 and is actively maintained.

This MITx Grading Library release presents a solution to provide automatic partial credit on formula problems. It also includes the ability to assign credit based on attempt number.

“The library is designed to be simple to use, give useful error messages, and be incredibly flexible. If what we provide can’t handle what you want to do, then you can always write a plugin that leverages the infrastructure we’ve already created. While we were at it, we implemented a number of long-overdue features and usability improvements over the edX implementation,” explained the authors.

To show off the features of the MITx Grading Library, the two developers have created a mini-demo course, open to enrollment.

This is the list of the main features, according to MITx:

The library is broken up into individual “graders” to grade different types of problems. Some simple graders just grade a single input, such as StringGrader and FormulaGrader. More complicated graders combine simpler graders to grade multiple entries, such as ListGrader.

Examples of how these all work are given in the mentioned course.

Robinhood Starts Its Retail Allocation for the App Traders Requesting to...