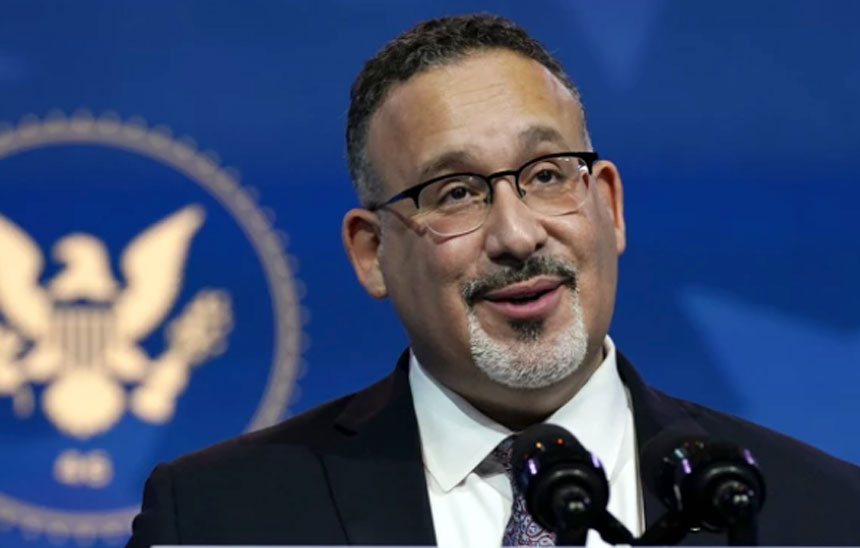 The U.S. House of Representatives on Friday passed congressional Democrats’ sweeping $1.85 trillion climate and social spending bill by a vote of 220 to 213. No Republicans voted for the legislation, dubbed as the Build Back Better Act (BBB). Representative Jared Golden of Maine was the only Democrat to vote against it.

The legislation now heads to the Senate, where it’s expected to undergo changes. Senate Majority Leader Chuck Schumer, a Democrat from New York, said the chamber “will act as quickly as possible.”

It also includes billions of dollars in new investments for higher ed:

U.S. Secretary of Education Miguel Cardona [in the picture above] said in a statement that the passed act will be “transformative.”

— “Free universal pre-K and dramatically improved access to child care, so all our children can start their learning journeys from the same starting line.”

— “Increased resources for HBCUs, Tribal Colleges, Hispanic Serving Institutions and other institutions that unlock opportunities for students of color and unleash their potential in our communities.”

— “Expanded access to affordable college with increased Pell grants for anyone who dreams of getting a degree.”

— “A stronger workforce pipeline with workforce development resources, for better pathways to the middle class.”

Data Shows that Remote Work Is Disappearing: Less than 10% Work...