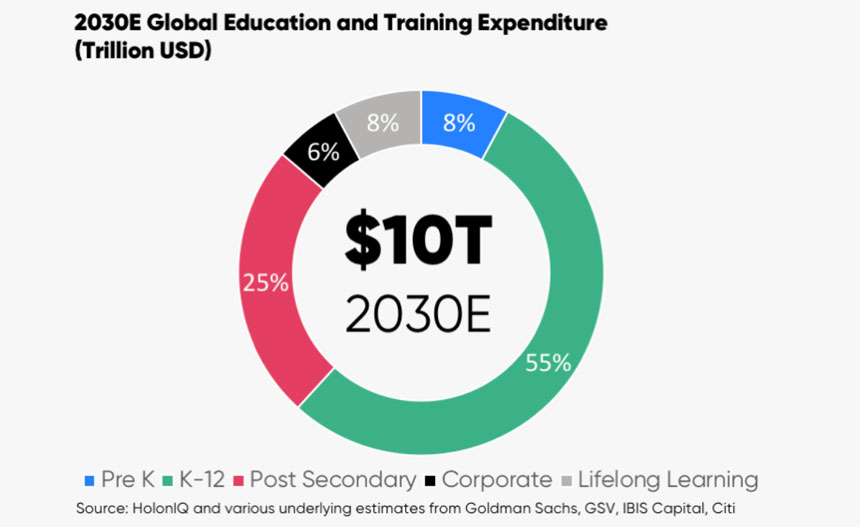 The spending on education will reach at least $10 trillion by 2030, reflecting a massive expansion in technological solutions related to re-skilling and up-skilling in developed countries. This data, provided by HolonIQ, shows larger growth than the cloud services sector, which Allied Market Research predicts will reach $through 1.6 trillion by 2030.

“EdTech holds the potential to better shape our future workforce and it shows why the future of education is just as important as the future of work,” writes Gauthier Van Malderen, CEO at U.K.- based Perlego, on Crunchbase.

The next decade will see an additional 350 million post-secondary graduates and nearly 800 million more K12 graduates than today, according to HolonIQ.

Asia and Africa are the driving force behind the expansion. Experts say that the world needs to add 1.5 million teachers per year on average, approaching 100 million in total, to keep pace with the unprecedented changes ahead in education around the world.

According to UNICEF, during the pandemic, 83 percent of governments faced with the closure of schools chose to utilize online solutions to deliver education. However, while 50 percent of education time is digital, less than 5% of spending is on digital education tools, according to Brighteye Ventures.

“Now is the moment to rethink how education is delivered and build a hybrid model with greater accessibility, affordability, and inclusivity at its core,” said Gauthier Van Malderen. “As we enter the third academic year disrupted by the pandemic, we should be having the same conversations around a permanent change in education to improve access and outcomes for learners.”