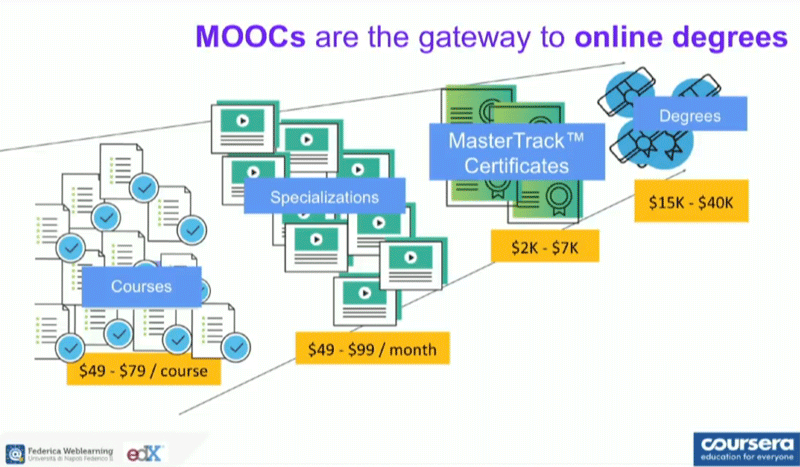 Coursera, with fourteen MOOC-based degrees in its catalog, is seeing slow progress in this modality. “They are growing slower than we expected,” revealed Dil Sidhu, Chief Content Officer at Coursera, at the EMOOCS 2019 conference, which took place last week at the University of Naples Federico II, in Italy.

Dil Sidhu, who started his work at Coursera at the beginning of this year, provided during his talk an interesting piece of data: “62 percent of those who take an online degree [in Coursera] started with a MOOC”. “MOOCs are the gateway to online degrees,” he stated. (See the graphic above).

This executive provided a snapshot of what lies ahead for Coursera: “Inclusion of Behavioral Sciences to help learners succeed. Data analytics to help identify content and learners habits. Help partners succeed (…). Social impact: Coursera for refugees, veterans, and incarcerated populations”.

During the same session at the University of Naples Federico II, Anant Agarwal, CEO at edX, and Simon Nelson, CEO at FutureLearn, stressed the impact of in-demand MOOCs on up-skilling and re-skilling employees as well as setting up lifelong learning habits.

Simon Nelson, whose company received a recent investment of $64 million, announced that FutureLearn will invest money in creating high-quality content. So far the three big MOOC providers have not invested in content, relying instead on universities’ and industry partners’ offerings.

The CEO of FutureLearn also disclosed that his organization is working, along with some other European MOOC providers such as France Universite Numerique (FUN) and Spanish Telefonica’s MiriadaX, in a common microcredential framework, recognized for credit by leading employers. This new credential will be provided after 100 to 150- hour classes. (See the screenshot below). 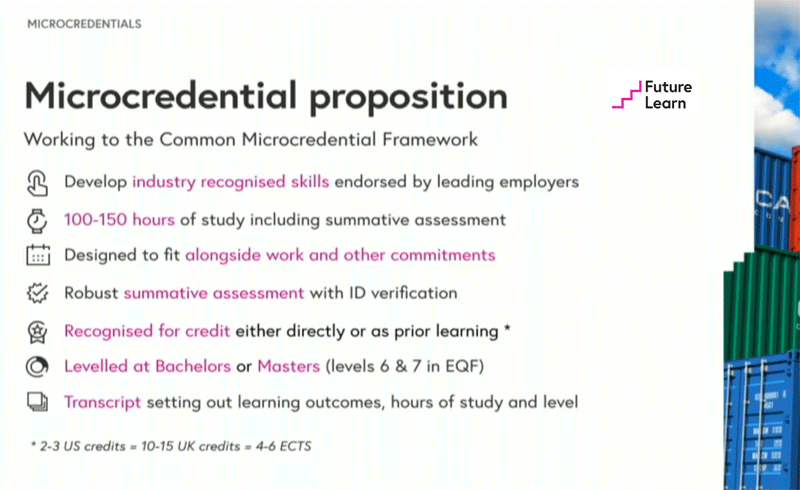