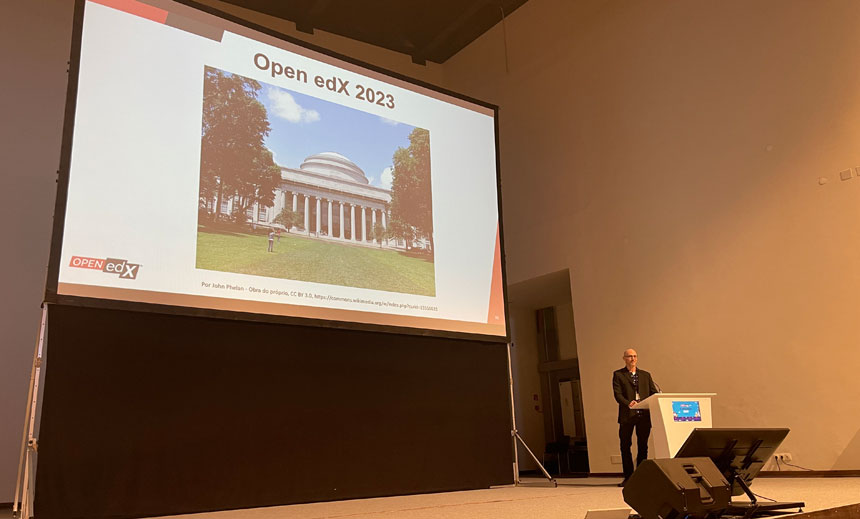 The 2023 Open edX Conference will take place at MIT in Cambridge, Massachusetts. Ed Zarecor, Vice President of Engineering, disclosed the location on the final day of the event. [In the picture above during the announcement.]

The 2022 conference in Lisbon, Portugal, attracted over two hundred experts on the Open edX platform.

2U Inc., the parent company of edX, introduced its vision for the platform, highlighting the need for new features, such as program pathways, customized nudging and in-course support, messages, learner intent data capture, catalog recommendation, discovery into gamification, and administrator analytics.

2U, who brought a staff of 35 people to the event, made a call to collaborate with developers. Ashley Bradford, Senior Vice President of Learning Technology at 2U, led the team on the ground.

The nonprofit stewarding the Open edX software and community, called tCRIL (the Center for Reimagining Learning), detailed its roadmap as well. A team of nine staffers — all of whom attended the conference — will handle the day-to-day operations, while promoting new ideas. “There will be several experiments, but not a silver bullet,” said Ed Zarecor.

The destination of the staggering $800 million received by the temporarily named tCRIL, controlled by MIT and Harvard, was not disclosed. Sources told IBL News that it has not even been decided yet.

That amount makes Open edX project the most well-funded open source project ever, on paper. “The hope is that tCRIL will invest this huge budget,” said Anant Agarwal, Founder of edX and now Chief Open Education at 2U Inc.

He also suggested having three or four large organizations invest heavily in the Open edX platform. Today, the main expected contributor is 2U.

Another story that emerged from the event was the departure of Marco Morales, a veteran edX engineer who moved to 2U. Marco Morales himself broke the news by posting on his LinkedIn account.