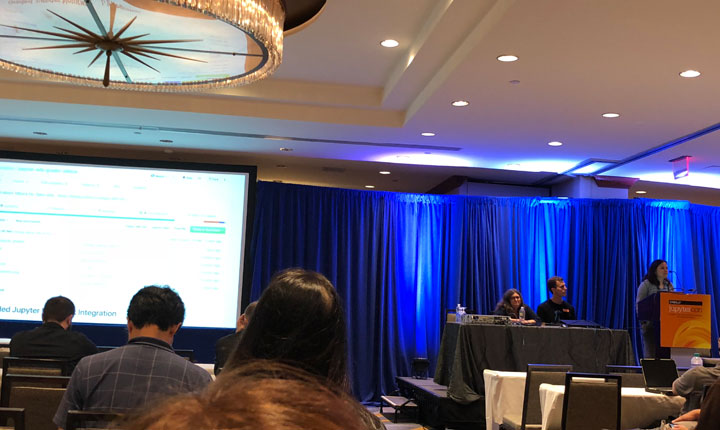 The 2018 Jupyter Notebook conference, which took place last week in New York, dedicated this year roughly 20 percent of its talks to education (11 talks in total), a significant increase from 2017 when only a keynote and off-program session were scheduled.

Professor Lorena Barba, from the George Washington University, set the tone, with a talk alongside Robert Talbert, from Gran Valley State University, about the flipped learning experiences with Jupyter. Prof. Talbert described it as “a new pedagogical model, where the instructor is a guide”, while Prof. Barba said that “Jupyter is a new genre of OER”. Also, “it is about discovering activities by working through structured computational software”.

Scholars from Berkeley University explained how the institution successfully uses Jupyter Notebook on edX online classes, with 1,000 students in data8, plus 10,000+ in a free online edX version. Rob Newton, from Trinity School, advocated the use of Jupyter “for every schooler”, especially in Statistics and Calculus courses. In a passionate keynote, Carol Willing, from Cal Poly San Luis Obispo, highlighted that “Jupyter creates value and connects people”. Quoting Walt Disney, she said, “if you dream it, you can build it”.  Jessica Forte, from Jupyter [in the picture], praised the IBL Education work by integrating Jupyter into the Open edX platform and pointed the audience to the code on Github.

The future of Jupyter in education was unanimously considered as extremely promising, and speakers agreed on the characterization of Tim O’Reilly –who was seen at the conference– on Jupyter, which this year received the ACM Software System Award, as “the next big thing”.

At the beginning of the conference, Fernando Perez, Paco Nathan, and Brian Granger, who chaired the conference, summarized speakers, sponsors and attendants’ view with the sentence “Jupyter makes us successful”.

“Jupyter is a powerful tool that should be a part of almost anyone’s toolbox. It might seem like it is a tool that is focused on Data Science and Machine Learning, but in actuality, it is way more than that. It can be a teaching tool, a code IDE, a presentation tool, a collaborative tool, and much much more. With tools like Jupyter Lab that are easily extensible, there is almost nothing that you couldn’t do directly in it.”

“Another example allowed you to play mp4 movie files. A third extension let you browse GitHub repositories. Extensions are written in NodeJS and can use UI technologies like ReactJS. If you can build it for a standalone website, you can build it to run inside a Jupyter Lab instance. This opens up possibilities for dashboards, applications, monitoring tools, and more. You could literally run your entire business through Jupyter Lab.”

This is a selection of tweets:

If you aren’t already convinced that @LorenaABarba is a force in Open Education with @ProjectJupyter notebooks, this news story is a must read. @OpenEdX and xblocks for notebooks and grading. Hope to see everyone at the @JupyterCon Education track this week. https://t.co/Q17upJqtK3

I’m using Bloom’s Taxonomy in my #JupyterCon talk and I have no remorse about it. I see edu-Twitter unload on Bloom sometimes and I don’t get the hate. It’s just a labeling system, flawed but a useful starting point. pic.twitter.com/7PM6qA4HkB

From @farwill: All plots and result in this presentation due to open source tools like @matplotlib ! Nobel
2017 . #JupyterCon . Sep 15 2015 First Ever Gravitational Waves Detected. pic.twitter.com/n06AgwqIGU

(more about this here: https://t.co/qpbhSY8lCp)