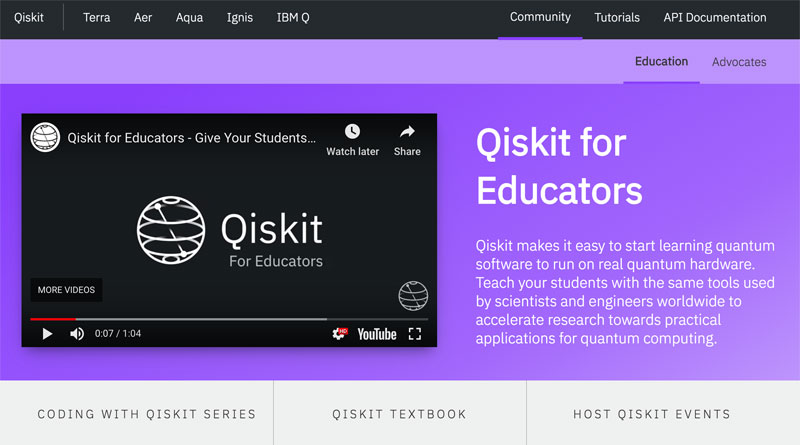 IBM announced last week the release of a video tutorial series, an open-source textbook, and a university hackathon program, in an effort to massively educate on quantum computing. This set of features are available on IBM’s Qiskit learning platform.

A part of this education push is also the new 5-qubit systems for educational use, as well as a new feature to reserve uninterrupted time on one of IBM’s quantum computers for running experiments.

“Our team is committed to making quantum sciences more approachable by investing heavily in the education to support this growing community and establishing the emerging technology as the next generation of computing,” Jay Gambetta, Vice President of quantum at IBM, said in a blog post.

“We need more students, educators, developers, and domain experts with ‘quantum ready’ skills. This is why our team is proud to release educational resources and tools, while also increasing the capacity and capability of our IBM Q systems,” he added.

Quantum computers use qubits, not bits, and programming them is quite different than traditional computers. However, IBM’s Q System can be programmed using Python.

Since then, IBM has released the Qiskit framework to enable users to more easily write and run code for quantum devices as well as providing a more advanced 16-qubit processor.

Over 28 million of experiments and simulations have been conducted to date, IBM says.

Aiming at Self-Learners and Educators

The ‘Learn Quantum Computation Using Qiskit’ open-source textbook allows students to learn quantum computation through practical problem sets run on real systems. It is aimed at both self-learners and educators.

The co-author of the book said that a strong background in quantum mechanics is not required.

IBM is also offering a ‘Coding With Qiskit’ video series.

Lastly, IBM is featuring a series of events:

Early this year, IBM showed the IBM Q System One at CES, in Las Vegas. It also announced plans to commercialize a 58-qubit quantum computer within the next several years.