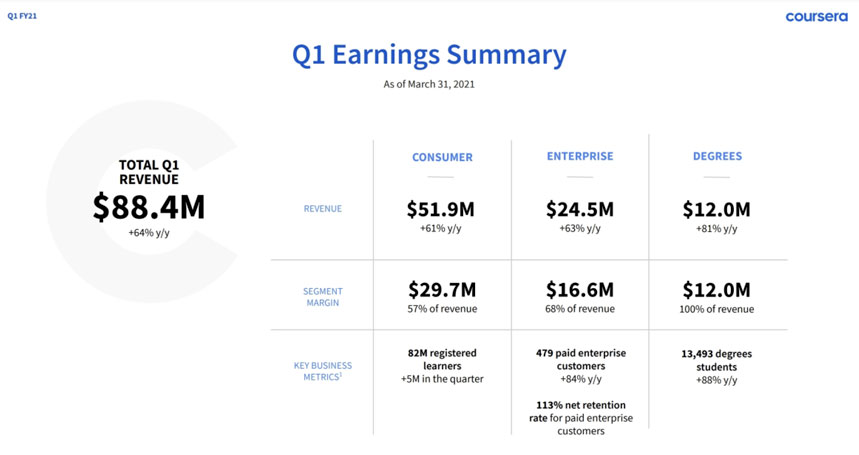 Coursera (NYSE: COUR), which became public on March 31st, dropped on Wednesday the 5th almost 8%, despite receiving analysts’ support regarding the first-quarter report. Investors still consider that the educational company is overvalued. On Thursday, the stock suffered another significant decline of 7.21%, until $38.98.

The company forecasted second-quarter revenue of $89 million to $93 million.

In its initial public offering, Coursera (ticker: COUR) sold 15.73 million shares at $33 each. The stock has since rallied about 36%. On Wednesday, shares were down to $42.

Josh Baer, from Morgan Stanley, wrote: “Coursera beat every estimate and metric we track in Q1, and we see positive estimate revisions ahead as the durability of growth and margin expansion is underestimated.”

Analyst Sarang Vora, from Telsey Advisory Group, said: “We believe Coursera’s consistent focus on growing its content catalog and member base, combined with enhancements to its technology platform, should continue to boost results in 2021 and beyond.”

Coursera’s CEO Jeff Maggioncalda was optimistic: “We believe the digital transformation of higher education is only in the early innings, and we see many opportunities to drive growth for Coursera in the years ahead.”

“During the first quarter, we demonstrated our ability to scale all parts of our business with revenue growth of 64% year-on-year,” said Ken Hahn, Coursera’s CFO. “Our freemium model allows us to acquire learners at a low cost and meet their lifelong learning needs with a growing selection of premium, job-relevant content, and credentials.”

Coursera disclosed other interesting data regarding its day-to-day operations: