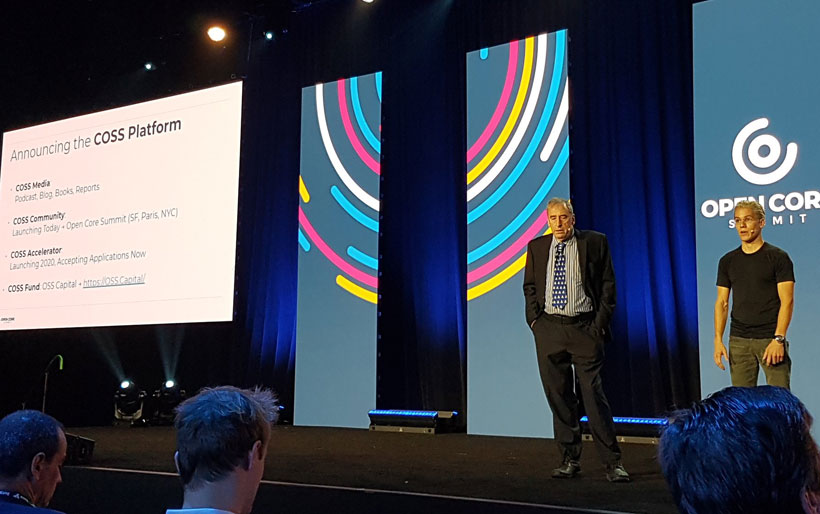 Organizers of the Open Core Summit – which took part this month at the Palace of Fine Arts in San Francisco – announced the COSS (Commercial Open-Source Software) Platform.

The goal of this initiative is to help commercial open-source organizations develop viable business models. “We want to educate, grow, fund and connect leaders of COSS companies,” as explained to IBL News by Joseph Jacks, founder of OSS Capital, a venture-capital firm who put together the Open Core Summit.

Today open-source licenses like Apache 2.0 have no requirements to compensate those who craft software. Consequently, many software companies have been struggling for years.

To solve it, open-source code cobblers such as Elastic, Confluent, InfluxData, MongoDB, Neo4J, and Redis Labs, among many others, are experimenting with improved business models and alternative software licenses.

Ok I have to admit that I love this approach. Big idea by JJ @asynchio and Bruce @BrucePerens #OpenCoreSummit @theCUBE is an open media model and many of our practices and technology that we built are based upon open source principles https://t.co/FrP4UGrY2F

Commercial open-source software is often developed as a substitute for costly proprietary software.

Despite the ups and downs, open-source has become a standard for software development and fast-paced innovation. Its collaboration and knowledge sharing model has transformed software’s development and delivery over the last two decades.

Open-source is getting increasingly popular, with 30 million developers exchanging code and ideas and collaborating on GitHub.

From the business perspective, companies like Red Hat and Canonical are proof that an open-source model can turn a profit. Other examples of companies which follow the model of “commercial support” include Docker, GitLab, and Databricks.

In this new environment, the open-source services industry is set to exceed $17B in 2019, and expected to reach $33B by 2011, according to CB Insights.

An indication of the growth can be found on Canonical/Ubuntu‘s plans to march into an IPO and recent acquisitions (Red Hat by IBM for $34B, and GitHub by Microsoft for $7.5B), alongside large public market valuations like those of MongoDB ($7.9B) and Elastic ($7.3B).