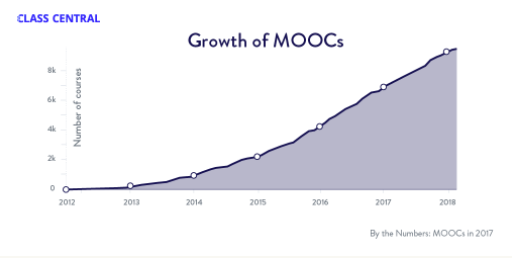 “The narrative in the early days of the MOOC space was around the disruption to universities. Six years later, we know that MOOCs are not going to lead to the demise of universities. However, according to the previous CEO of Coursera, Rick Levin, while MOOCs may not have disrupted the higher education market, they are disrupting the labor market. The real audience for these courses is not the traditional university student but what Levin calls the “lifelong career learner”: someone who might be well beyond their college years, but takes online courses with the goal of achieving professional and career growth,” writes Dhawal Shah.

edX.org remains the only platform that still offers most of its courses for free.

On the corporate training side, the Coursera for Business service attracted over 500 companies in 2017, up
from  30 last year. EdX for Business is now working with 40 companies.