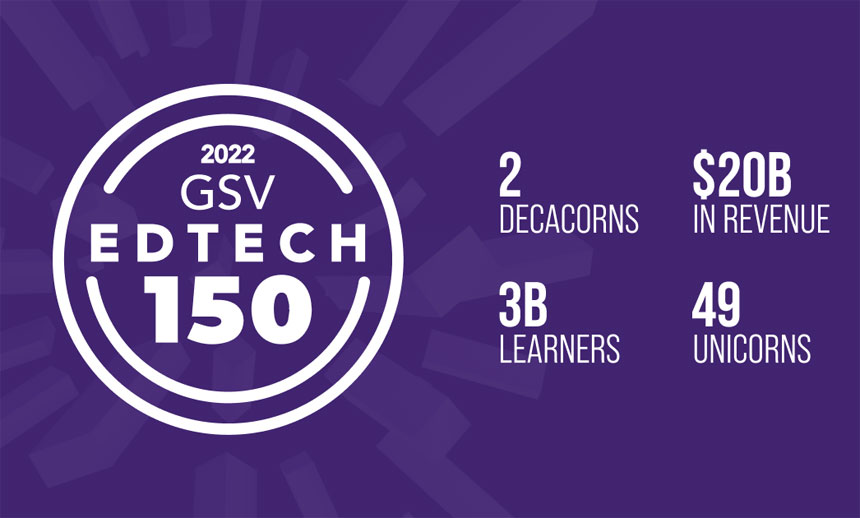 EdTech companies that have figured out how to scale and achieve the highest Return on Education (RoE) amid Covid uncertainty continue to experience extraordinary growth and traction, says investor at GSV Ventures, Alexandra Argo, in an article at Medium. Investment firm GSV is now preparing its 2022 ASU+GSV Summit, scheduled for April 4-6.

In parallel, the company has released its 2022 GSV EdTech 150 list, with a selection of transformative companies in digital learning backed by venture capitalists. This selection comes after an evaluation of 3,000 companies across the three major sectors: higher ed, K-12, and life-long learning, including here workforce and adult consumer learning.

“We estimate that the 150 companies reach ~3 billion people, or close to half of the global population, and generate approximately $20 billion in revenue, growing in the high double digits,” wrote Alexandra Argo.

A third of the companies, like BYJU’s and Course Hero, are experiencing strong Network Effects.

In 2021, there were significant IPOs across the industry. Coursera, Roblox, Duolingo, Udemy, and Instructure successfully completed their public offerings, and Nerdy went public via a SPAC.

Today, there are a handful of late-stage private companies, including BYJU’S, Course Hero, Eruditus, Quizlet, Hotmart, and others positioned as potential IPO candidates.

However, since April 2021, public Edtech companies have declined 32% amidst an unfavorable macro environment, including higher inflation and decreased enrollment in higher ed.

Another remarkable fact is China’s EdTech companies are declining, after the ruling Communist Party issued in July 2021 a regulation on the private tutoring sector requiring private companies to register as nonprofit organizations and banning future IPOs. Overnight, publicly-traded companies such as TAL Education, Gaotu Techedu, and New Oriental Education lost half of their value. This regulation decimated the potential growth of the K-12 industry in China.