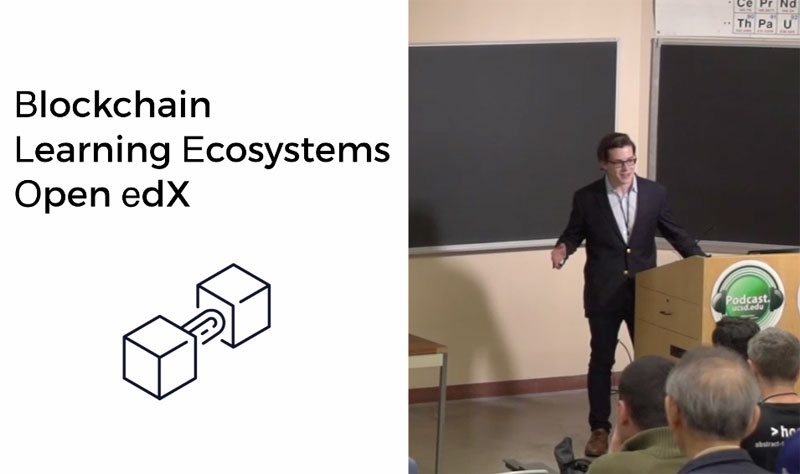 Miguel Amigot II, CTO of IBL Education, spoke to the issue of data centralization in today’s learning ecosystems during the 2019 Open edX Conference in San Diego. Blockchain technology, he argues, decentralizes data ownership away from a small selection of vendors which allows the ability for companies to share data without having to trust one another.

Centralization is where we are today, as businesses protect their learners’ data and commoditize it. However, this is inefficient for the learner as there is no ability to move with ease between different learning management systems.

“Blockchain allows us to see what a world would be where businesses and different organizations don’t make a living by siloing off that data.”

An obvious use case is certificates, Miguel argues, which require time sensitivity and validity from their sources. This has already gained traction, such as MIT’s blockcerts that “allow us to insert certificates on the (public) Ethereum blockchain.”

Adaptive learning as another case study illuminates the issue that due to the siloing of information by companies, true adaptive learning is not yet possible. There is a rigidity that users face where they cannot prove what skills they have already mastered, because they are unable to share achievements from other learning platforms.

Blockchain allows convenience and flexibility in these case studies and many others, such as user management. In his talk, Miguel urges us to think, “Are these problems worth solving? Are we just going to say, in the future, everything is going to be centralized and we are going to live in a world where perpetually organizations make their money by siloing data and really implementing dark practices…”

Blockchain allows us to share without trusting each other. “There is some data that we are going to agree to share, and the arguments for that aren’t altruistic necessarily…it’s really just about what is most practical.”

Watch Miguel Amigot’s full talk in the video below.